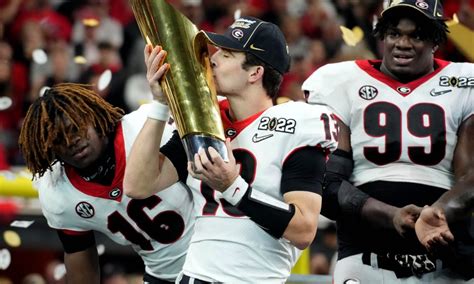 Much like Clemson ended a 34-year National Championship drought to cement their arrival as an Elite Program 6 years ago, Georgia has broken the glass ceiling into the stratosphere of College Football. The perennial gatekeepers from Tuscaloosa were unable to hold off the Dawgs a second time, and thus, the 41-year cloud of being not-quite-ready-for-primetime has lifted over Athens.

Like 2021, Georgia will enter 2022 with the top-rated overall talent level in college football. This may not make them the title favorite, but they would certainly like to announce that they are the next team you will be sick of seeing in the playoff every year.

There was a lot of change in college football in 2021 as this was a transitional year. That was somewhat expected, but every program ascension requires an equal and opposite program descension. Georgia and Michigan State are back on the Elite Program list, but Florida State, Oregon, and Stanford are off it.

In fact, the Pac 12 as a conference is cycling way down. After having more talent than the Big 10 for most of the past 17 years, they now have the lowest talent level of any of the Power 5 conferences and their lowest talent level in two decades. USC is their last remaining Elite Program, and if Lincoln Riley cannot right the ship, they will lose their privileges too. With so much top talent out west signing with teams in the east, you have to consider that college football at the highest level is becoming a regional sport.

The SEC has increased their overall talent level over the past 3 years. However, what’s interesting there is that Georgia, Alabama, Florida, Auburn, and LSU all dropped in talent level heading into 2022. It is the other SEC programs that are responsible for the talent increase conference-wide. If you are a fan of another conference, this is scary. We are getting close to where lower-ranked SEC teams like Arkansas, Missouri, and Vanderbilt have more talent than championship contenders in other conferences like Utah, Pittsburgh, and Baylor. Seriously, look at the data and then consider that Oklahoma and Texas are on the way as well.

Clemson had a down year this year and that was welcomed by the average college football fan. You could even say that Clemson has been trending down since 2018 even though they have still been having Elite Seasons. It will be interesting to see if they disappear from the big stage altogether or if 2021 was a one-year hiccup. This off-season, Clemson lost their OC, elite level DC, and elite level AD. What’s interesting is that they have just now acquired typical Natty-level roster talent. In 2016 and 2018 they won the Natty with the lowest talent level ever to win one when they were ranked #14. In 2022, they will bring the #4 ranked talent level to the table which is the highest talent level they have ever had.

Luke Fickell of Cincinnati was the highest performing head coach of 2021. He elected to stay at Cincinnati and not entertain offers from bigger programs. Billy Napier, the former Dabo Swinney and Nick Saban assistant, is currently ranked as the 5th best career head coaching performance from 2005-2021. He will take his talents to Florida in 2022 where we will see if he is for real against the best the SEC has to offer.

Alabama did not capture the Natty this year, but they did become the Most Dominant CFB Program of All Time (1936-2021). They passed Oklahoma with their 104th combined year with an Elite Season and as an Elite Program.

2020 Season Updates and Thoughts
The Difficult Season at Clemson