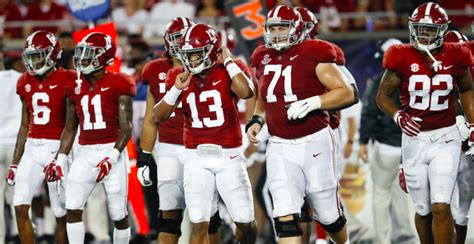 If you follow college football, you already know that the favorites to win the National Championship are Alabama and Clemson. These two teams have faced off in the College Football Playoff in each of the past 4 years. The CFB universe has not only seen the winner of this matchup win the Natty 4 years in a row, but it has also seen these two teams mostly obliterate the rest of the competition in the playoff. Only Georgia has stood toe to toe with one of these teams, Alabama, the past four years.

(Full disclosure: I am a lifelong Clemson Tiger fan, but I try to be as objective as possible.)

Many proponents of moving to an 8-team playoff will say that it makes the most sense to have the 5 conference champions included along with 3 at-large teams. On paper, yes, this makes a lot sense in college football’s conference structure. The evidence, on the other hand, says that there is no reason to move from 4 to 8. We have seen that there are 2 teams head and shoulders above the rest. In fact, you could remove Clemson and take this a step further. It would be accurate to argue that nothing has changed since Florida upset (and blew out in convincing fashion) #1 and favored Ohio State way back in 2006. The road to the National Championship still goes through the SEC Champion every single year. You could make the argument that what the CFB Playoff Committee has really been doing since 2014, is trying to find the 3 best teams to challenge the SEC Champion.

Since 2006, no other non-SEC program, has been able to consistently challenge the SEC Champion like Clemson the past 4 years. If college football is cyclical, we’ve had one program break through the glass ceiling and throw a wrench into the SEC dominated college football paradigm. The problem is that this one team also happens to be located in the middle of SEC country. This is not at all what the multitude of fans outside of the south were hoping for.

Of course, there is no birthright for Alabama and Clemson to play for the Natty or even make the playoff. History has shown us that all cycles come to an end. With a new season starting this week, hope spring anew that this could be the end of the temporary Alabama/Clemson cycle. After all, every cycle has to end, and therefore, has to end unexpectedly.

Here at CFB Elite, we have a lot of different metrics that chronicle the history of results on the field. By examining these results, patterns can be found. So what I did here was to take all of the metrics on this site, identify the patterns, and come up with the teams that have the best chance to win the National Championship based on those patterns.

Below are the results of the combined metrics and the percentages based on them that each team has of winning the National Championship in the 2019 season. Here is what I found.

To perhaps nobody’s surprise, Alabama is at the top. In fact, based on the metrics, Bama is more than three times likely to win the Natty over 2nd place Clemson, as well as, every other team. Alabama simply checks all the boxes as far as being an Elite Program, Elite Team last year, excellent head coach, and #1 talent level in college football.

Of course, if you have seen my work before (or any advanced stats metric for that matter) you know that Clemson routinely out-performs almost every metric out there. They are so consistently the outlier in these metrics that I have considered throwing them out to improve their accuracy. It’s not a guarantee but, for the past 4 years, Clemson has defied the metrics over their 4-year run. The best example is their talent level. They have won the national championship with a #14 ranking in the WRC (talent level). Since the WRC began in 2005, no other team has won the Natty without having top 10 talent in the WRC.

Rounding out the top 5 above are Elite Programs, Oklahoma, Ohio State, and Georgia. The reason Georgia is not #3 ahead of Oklahoma and Ohio State is because 1. They were not an Elite Team last year and because 2. Their WRC ranking.

A gigantic 79% of the time, the national champion was an Elite Team the previous year. Only 14% of the time does the NC come from a team on the Big Boy level (just below Elite) where Georgia finished last year. The WRC, is interesting because Georgia is actually ranked too high. The NC comes from #6-#10 more often that it does from #2-#5. I’ll be the first to admit that this could be an anomaly that will work itself out over time, but the difference is 36% of the time for #6-#10 and 21% for #2-#5. It will interesting to look back on this after the season and see how this plays out.