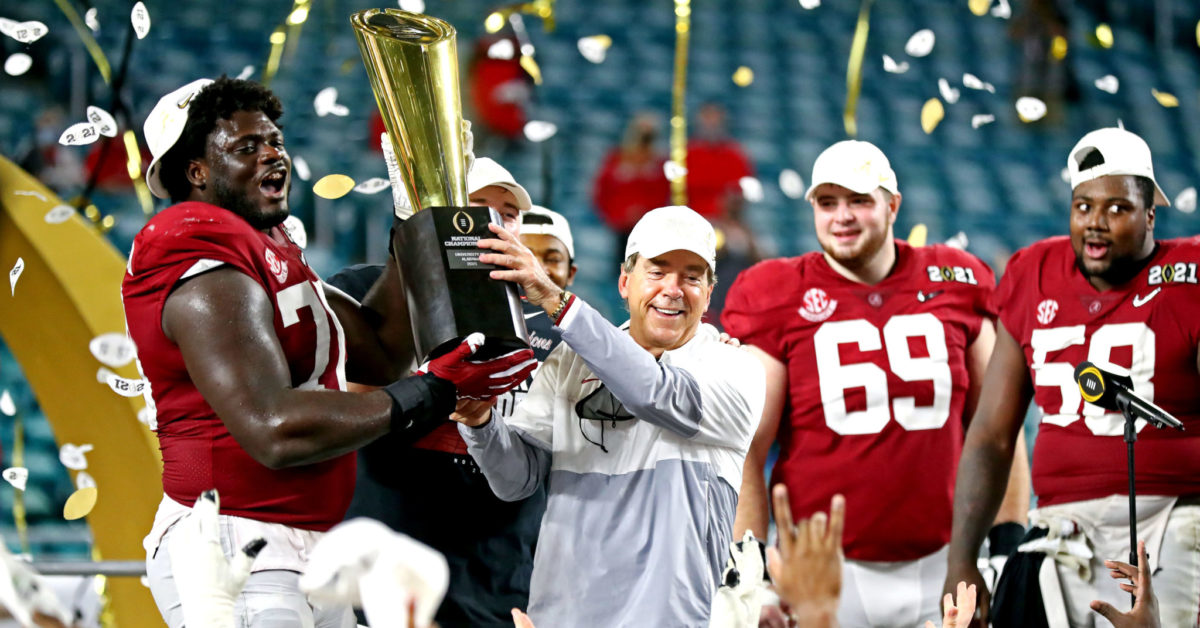 I guess the most important thing that happened during the 2020 College Football Season is that we actually had one. Around May and June, I was wondering if the entire south was going to destabilize into a dystopian sci-fi movie as soon as they announced football was cancelled. But it wasn’t. Don’t get me wrong. The season was weird, but we had one. Hopefully we never have to experience what it would be like to not have one.

I’ll do a quick review of my beloved Clemson at the bottom, but let’s dive in to the season from an Eliteness perspective first.

After 2019 became Alabama’s first non-elite season since 2007, Nick Saban’s Crimson Tide roared back to the top of college football in 2020. We’ve now seen probably the two best offenses in CFB history in the past two seasons with LSU and Alabama. Defense are no longer winning championships. They’re getting toasted on the outside by explosive offenses. Those wondering if college football was beginning to pass Saban by were rebuked as Alabama was clearly the best team in college football all season long. Saban claimed his 4th Coach of the Year award according to the HCR by narrowly beating out Hugh Freeze of Liberty and Jamey Chadwell of Coastal Carolina.

Speaking of that, an interesting consequence of Covid was the lack of non-conference games. This allowed programs like Liberty, Coastal Carolina, and Louisiana to rise up into the top 25 and claim Big Boy status in 2020. The true legitimacy of their ascension was ultimately questioned by the CFB Playoff Committee, but the groundwork has been laid for them to prove their true ascendance in 2021. Although, one would think Freeze, Chadwell, and Napier won’t be long for their schools if winning like this continues.

As far as the metrics here are concerned, Georgia had the most interesting rollercoaster in 2020. With only 2 Elite Seasons in the past 8 years, they can no longer be considered an Elite Program here. However, that hasn’t stopped them from recruiting like one. In the WRC, Georgia’s #1 classes from 2018-2020 have reached maturity. This will allow them to pass Alabama as the most talented team in college football for 2021. Alabama owned that #1 spot in the WRC for the previous decade (2011-2020) and will drop to #2. So why don’t we just have Georgia open the season with Clemson on a neutral field next year? Boom, playoff implications in week 1. A win like that over Clemson would have to shift the perception of the Georgia program right back into Elite status.

From a WRC standpoint, the largest one year increases in talent for 2021 will be with Texas A&M (11th to 5th) and Oregon (16th to 9th). A&M finished 2020 with an Elite Season for the first time since the Johnny Manziel team that beat Bama in 2012. Now, the talent disparity between them and LSU and Alabama has shrunk. Oregon, an elite program with a conference that is ripe for the taking, could be a good bet to end the Pac-12 drought in the playoff next year even though they might start outside the top 10.

Being a Clemson guy, I’ll briefly chime in for those who used to read me at Clemson blogs. Obviously, Trevor Lawrence and Travis Etienne are two of the best to ever play their position in the ACC. However, this Clemson team wasn’t as representative from a talent, development, and desire to win standpoint as the teams of the previous 5 years. Etienne appeared to be battling an injury throughout the season and both the OL and DL performed at a lower level than the 2015-2019 teams. There was also lack of mature depth across the board that was missing in the past as well. Yet, they had a great ACC Championship season that I am grateful to have witnessed. For the most part, Clemson was still superior to every team on their schedule (sans Ohio State of course). Pundits pointed to the lack of a tall, elite WR like Higgins/Ross as potentially holding them back, and there’s some truth to that, but I thought Cornell Powell and Amari Rodgers stepped up and were fire last year. I also thought Clemson was better at the TE position than they had been in a few years as well.

What made me the most nervous about this Clemson team, as well as future Clemson teams, was that we saw the first sign of entitlement and prima donna mentality by the players. No longer did they possess the “little ol’ Clemson” mentality that was fighting and clawing for respect. This issue was most evident in the 3 game stretch against Syracuse, BC, and Notre Dame during the season, and of course, in the season ender against Ohio State. I don’t know if this will carry over into next year, but this mentality was definitely a contributor to the end of Clemson’s 1980’s run in the early ’90s.

Lastly, Ill address the defense, and particularly, the performance against Ohio State. That was a complete ass kicking. Having Clemson out-gunned, OSU could basically run one of three plays every time (outside zone run, post, and check down in the flat) and Clemson had to guess which one they would need to overplay to stop. The secondary was horrendous in the game and exposed, but in Venables scheme, there needs to be havoc plays that flip the field. Without the DL and LBs being able to get home on Fields, this made the job harder for the secondary.

In 2021, they get everybody back except for Kendrick and Jones Jr. and that includes the two freshman freaks, Myles Murphy and Bryan Bresee as well as Tyler Davis and James Skalski. They will need to fully develop two of their three high-upside young CBs. Hopefully, there is more depth next year such that losing a Tyler Davis or James Skalski for a couple games doesn’t severely affect the overall defensive performance.

Clemson will be a year older and more mature in the trenches next year and that should help the new skill guys. Everybody has seen that Big Cinco can play at an elite level at QB. Obviously, health is always a factor, but it’s the heart, desire, and leadership of the guys on the field that will matter the most to me. Answering that question in 2021 should illuminate the trajectory of the Clemson dynasty moving forward.