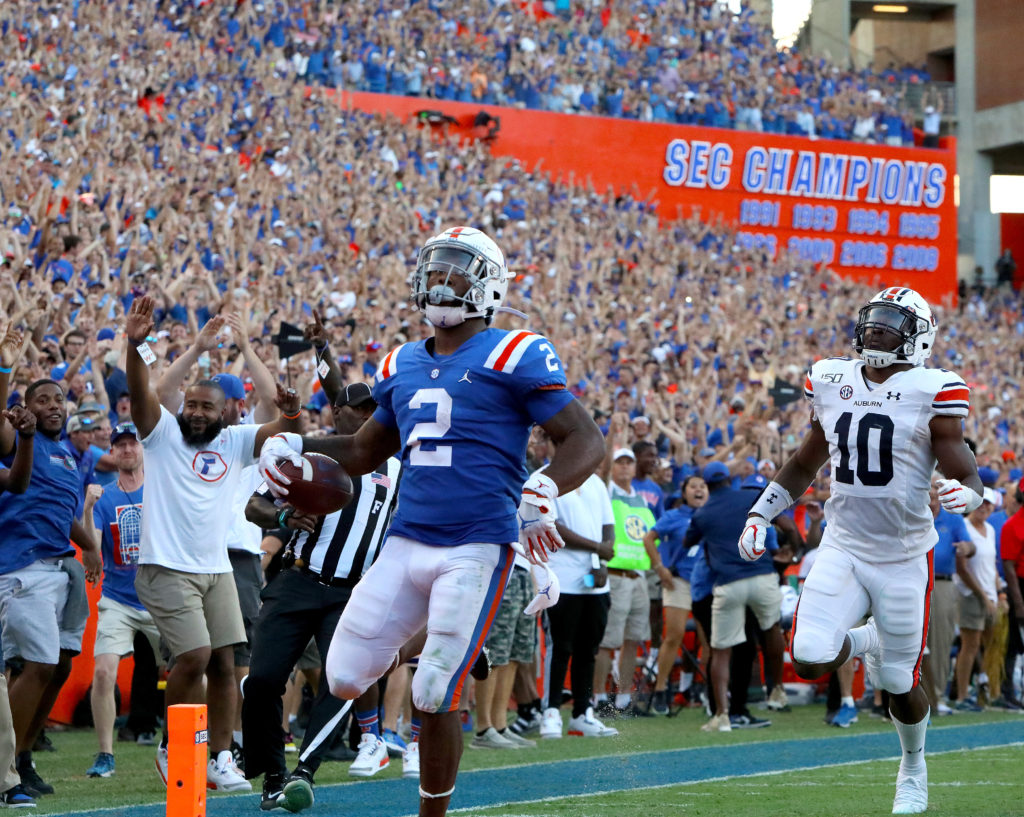 The conference schedules are in full swing and we witnessed two casualties drop from the ranks of the unbeaten in week 6. Poor Auburn. They walked into The Swamp with probably the best resume in college football. They walked out of The Swamp with a loss that handed all that mojo over to Florida. In the zombie game of the week, Michigan walked into week 6 left for dead after that Wisconsin thrashing. It wasn’t pretty at all, but the Wolverines methodically stymied previously undefeated Iowa to breathe life back into their season. In another Big 10 showdown, Michigan State methodically shut down Ohio State offense in the first quarter. They just had to gas themselves to do it. Once they ran out of steam in the 2nd quarter, Ohio State poured on 24 2nd-quarter points to effectively end the game.

So, Auburn takes the big tumble this week dropping from #2 to #9 in the Eliteness Tracker. Florida replaces Auburn in the top 3. The undead Michigan enters the tracker at #12 after their win against a still-ranked Iowa squad. With the calendar turning to October, a herd of zombies re-enter the tracker. Four 2-loss teams are back in at the bottom of the tracker. Here are the Eliteness Tracker standings to this point.

Week 7’s schedule is excellent, so let’s dive right in.

Georgia remains #1 in the tracker heading into week 7. They will be visited by SEC East opponent, South Carolina, at noon on ESPN this Saturday. Also at noon is the Big 12’s marquee matchup as undefeated Oklahoma travels to Texas. The winner of this game will temporarily be in the driver’s seat of the Big 12, although like last year, these two may face off again in the Big 12 Championship Game. Baylor may disagree with that theory though. Either way, one of these teams will get the resume builder they need to become the Big 12’s potential playoff representative.

The #1 team in the AP poll, Alabama, doesn’t have that resume builder win yet, and they probably won’t get it this week either. Bama faces a very good #24 Texas A&M in College Station, TX. However, if Bama wins, they will almost certainly knock Texas A&M out of the Top 25 and, therefore, still won’t have a win over a ranked team. Furthermore, Clemson and Auburn, who have already beaten Texas A&M, would also have A&M removed from their resumes (at least temporarily). With a strong showing against Bama and 4 straight games in which they will be favored, A&M could get back in the top 25 before they close the season with Georgia and LSU. Should A&M defeat either Bama, Georgia, or LSU this year, it would permanently bolster the resume of the teams that were able to defeat them. Clemson and Auburn will be big A&M fans this weekend.

In the Big 10, Michigan State travels to face perhaps the only Big 10 team with a better defense than them, Wisconsin. Michigan State will sell out to stop the run, so they could give Jonathon Taylor and Wisconsin some trouble. However, Michigan State has to somehow manufacture some offense in order to pull off the upset. That would be something we haven;t seen yet. Michigan State has managed just 7 and 10 points against the two ranked teams they’ve faced this year, and both were losses.

It seems like Florida State started the season poorly enough to have more than 2 losses, but they don’t. They still have a conference title to contend for and will travel to Death Valley to face the ACC favorite, Clemson. This is an interesting game for a few reasons. FSU has been playing better as of late and still has the best talent in the ACC (WRC #5). Clemson has not looked like the team they were at the end of last season and Florida State’s best effort could turn this game into North Carolina part 2 for the Tigers. Then again, Clemson is going to show up angry. They’ve had two weeks to listen to the national media take shots at their early season showing. If this provides the wake-up call Clemson needs, this game could be where Clemson puts it all together offensively. That’s why, if I were a betting man, I would steer clear of this game like the plague. Who knows what we’re going to see?

USC travels to Notre Dame pitting #13 against #14 above. This is a game that USC has to win to stay in the eliteness conversation. The USC team that gave 110% effort against Utah can compete with Notre Dame. The team that showed up the rest of the season, cannot. This is another game I would stay away from, but I still like Notre Dame to banish USC into “wait ’till next year” mode. That ND pass rush should be able to harass the inexperienced USC QB into mistakes.

The night game on ABC will feature undefeated Penn State trying to do what Michigan just did by taking on Iowa. Iowa will be at home, so this will be a great barometer of just how good Penn State is this year. If Iowa can clean up the turnovers and mistakes, they could surprise in this game.

And now to the main event of the evening. #2 and #3 above, LSU and Florida face off in Baton Rouge in the biggest game of the week. The cannibalization of the SEC began last week with Auburn’s demise. This week, either LSU or Florida will have an “L” beside their name. Both teams are undefeated to this point, but they have gone about winning in different ways. LSU has the #1 scoring offense in the country at 54.6 points per game and Florida has the #5 scoring defense allowing just 9.5 points per game. This is the proverbial “something’s gotta give” matchup. All eyes will be on this one as the winner will walk out with the biggest win of the season so far.