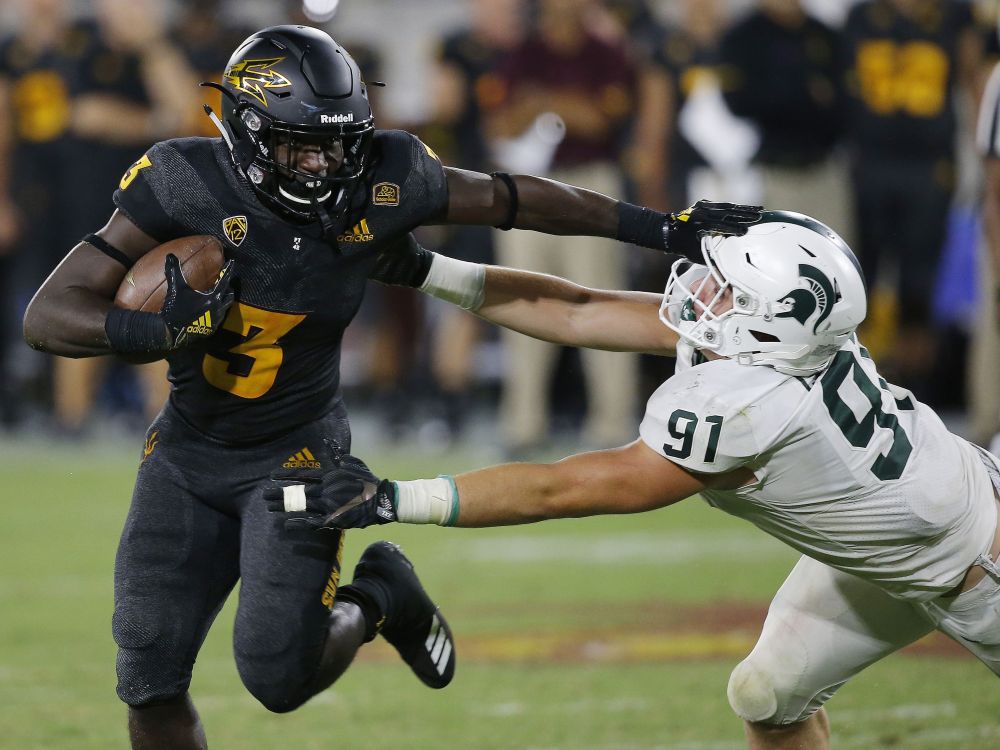 As expected, week 3 was kind of a snoozy weekend at the top. In the middle however, there was plenty of excitement. The lead story from an Eliteness perspective is probably Arizona State’s 10-7 victory over Michigan State with BYU’s win over USC as a close 2nd. Michigan State and USC became the 5th and 6th Elite Programs to pick up a loss on the season. Florida State and Stanford became the first two Elite Programs to pick up their 2nd loss of the season. 2 losses and no top 25 wins gets them removed from the Eliteness Tracker below.

Maybe the most shocking score of the weekend was The Citadel 27, Georgia Tech 24 in OT. Perhaps it’s time for programs to think twice about scheduling The Citadel. You may recall that they defeated South Carolina a few years ago and were tied 10-10 at halftime with Alabama, of all teams, last year. The Citadel’s arch-rival, Furman, not to be out-done, was leading Virginia Tech at halftime 14-3. VT ended up winning that game 24-17. With Kansas blowing out Boston College on the road, it was a horrific showing for the ACC.

The “Skylab Award” for the best “back to earth” performance of the week was Maryland. After coming into the game averaging over 70 points per game, Maryland managed only 17 in their loss to Temple. And poof, just like that, their one week stay in the top 25 is over.

The official big winner from week 3 was UCF. The Knights rode a 38-7 halftime lead to a comfortable 18 point win over Stanford. UCF faces Pittsburgh this week and that game is one to keep an eye on. Pitt played Penn State extremely close this past week. The 2018 Coastal Division champions of the ACC could be the last test for UCF this season. A UCF win this week could probably mean another undefeated regular season and another potential opportunity to break into the playoff.

Due to the matchups, there was not a lot of movement this week in the Eliteness Tracker. Oregon, through no fault of their own, slipped out of the top 15 this week. That allows Clemson to move up to the 2nd spot over Auburn. That may only last a week, of course, as Auburn gets A&M on Saturday. Or, if A&M wins, Clemson could jump LSU. Either way, we still have a very southeastern flavor at the top…for now.

Last week had exactly zero matchups between current playoff contenders. This week, on the other hand, has SIX:

Happy viewing. That’s basically your TV schedule in order for Saturday. The main event is obviously the last game on the list.

After an undefeated regular season last year, Notre Dame made the CFP and fell victim to eventual national champion, Clemson. Like a lot of teams that faced Clemson at the end of the season, ND had to choose what they wanted to stop. They chose the running game with the ACC POY, Travis Etienne, and trusted their excellent DBs to stop Higgins and Ross on the outside. Clemson won that battle and ND gave up big play TDs. Perhaps even more concerning though, was that Ian Book and the ND offense was shellacked. ND managed just 88 yards rushing, 160 yards passing, 3.59 yards per play, and just 3 points. In Georgia, ND will face a similarly athletic and aggressive defense like Clemson was in 2018. With an offseason under his belt, Ian Book will have to show that he can either quickly make the right decisions against the Georgia rush or extend plays with his legs to give him more time.

Of course, that may not matter if they can’t stop D’Andre Swift first. Swift is averaging 9.35 ypc so far this year after averaging 6.44 for the season last year. If they commit to stopping the run as they did against Clemson, then they also have to avoid the surgery of Dr. Fromm. Jake Fromm is completing 75% of his passes at 10.0 yards per attempt this season after finishing ranked #3 in the nation in Total QBR last season. I do think a lot of Notre Dame’s two coordinators and do think ND will be all schemed up for the affair. I just think that Georgia has them out-manned on both sides of the ball and that as the game progresses, will eventually pull away. No matter who wins, this will be the biggest victory of the young season and put the winner in the driver’s seat for a playoff spot.

We know we are going to see the best division in college football, the SEC West, beat the holy hell out of each other throughout the rest of the season. With a playoff spot (or two) on the line, this is appointment TV for college football fans. The SEC West war of attrition starts this week when Auburn travels to Texas A&M. Even though this is both teams’ 2nd high profile matchup of the season, we didn’t learn very much about these two teams in their 1st matchup. Auburn barely escaped an Oregon team that led almost the entire game and A&M laid an egg on offense against Clemson where Kellen Mond was just plain off. I have no idea what to think of these two teams heading into this game. All I know is that Texas A&M is in a must win situation to stay in the playoff conversation. Auburn could absorb a loss but must defeat Alabama and Georgia later in the season and win the SECCG (likely against Georgia or Florida).

Unless LSU goes undefeated this year and Texas wins the rest of their games, Texas is probably out of the playoff race. Therefore, they are in must win mode. Oklahoma State, on the other hand, could steal Texas’ mojo on Saturday and become the Big 12s primary threat to Oklahoma. I think an undefeated Big 12 team would make it in.